Except I’m approaching older’ish and late nights are harder to come by.  But in this magical evening of late night reflection, I find myself typing to you. My friend.

In this vulnerable moment, stealing my son’s leftover Swedish fish from his birthday, a lot of topics come to mind. Not only the super-positive Facebook braggadocious topics about:

At this point in life you’ve been friends with people long enough that you can read between the lines. You really know how they’re doing, despite the positives they say.
curiosity about

It’s a tricky balance to care + mind your business.

12 years into running a business you find yourself loving the stability while wanting to take calculated, massive growth risks. It’s a funny/motivating/humbling thing to have a business credit card bill for one month that is more than you used to make in a year.

That sounds daunting, but don’t read into it more than that. It’s just things that you think about.

The last two years have been weird, both in good and bad ways.

Many of you know that I acquired EoE two years ago. It’s a complicated, chronic disease of the esophagus. It caused me to lose 30lbs in 6 months and flipped my world (and my wife and kids’) upside down. It sucks (bad!) but I’ll leave it at that. Because if anything I’ve learned after acquiring that disease over night (literally, over night), it’s that everyone has something going on in their life and some people have way worse circumstances.

That’s an example of the bad that life can throw at you.

To top off this good/bad/good sandwich of topics, there are also positive things that I find myself thinking about/appreciating. 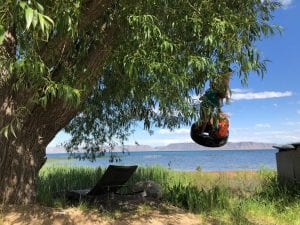 I don’t know why anyone would want to custom build versus buy pre-built (looking at you, Joseph). And building yourself doing the physical, manual labor is a whole other story. That’s why three-3-three years.

But I love it it. No question that it massively sucks, but it’s equally great. Because I’ve been taking pics during the process and it will be unbeatabley (that’s a word, right) rewarding to look back at that storyboard of pics when it’s done.

The first year of building the cabin I went there a lot over winter weekends to knock out some work. The second year, not so much. I got burned out.

However, last weekend I went again after not having been there for at least six months and I realized “hey, this is further along than I remembered.” That weekend I accomplished a decent amount. Even better, my friends Allen and Suzie coincidentally asked if I was up there. I was. So they stopped by.

What are the chances of us both being at the lake? I hadn’t talked to them in 2 years and just happened to connect that weekend?

That day was awesome. Enjoyed some good time with my friends, and appreciated their kids being able to enjoy the tire swings on the big tree at our lake property.

Started the day solo at the cabin. Ended it jumping off a newly built dock out 300 feet in the lake that my old friend helped me build. 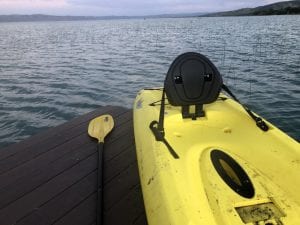 It motivated me. I was fired back up about the cabin, and I’m going back up this next week to progress that 95% completion rate to 99%. After the next few days, the cabin will be usable.

The cabin, like the pool, is a legacy that I’m building for my family. A legacy of memories.

Spoiled kids? Not a chance.

After my protecting my kids’ health, one of my next greatest concerns is to make sure they are raised NOT spoiled. Instead, to be grateful.

Other than birthdays and Christmas, I next-to-never buy them toys. I teach them to save and buy their own.

That’s not to say that I don’t buy them stuff. But my “stuff” tends to be more experiences than materialistic items.

But that’s my role as a dad. To give them the best life ever.

I’m rambling at this point.

We all have something going on. That’s made me more appreciative of life. My life, and the life of my friends.

It’s made me expect less from people, but more-so GREATLY appreciate those small things that others do offer since I know they have other things going on in their own life.