Running errands this morning I stopped to grab coffee. I usually buy an extra coffee or two so I have some deliciousness to heat up the next morning without having to make another run. 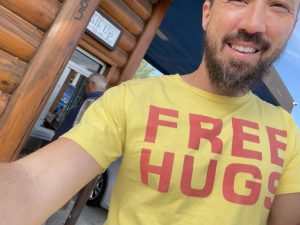 Guy behind me at the walk-up window thought my shirt said “free drugs.” We laughed and I told him how I received the same comment from a lady at my kids soccer game a few weeks ago.

Both times that comment was made was older people. Makes me wonder who we should really be concerned about with drugs. 😂

He had one coffee while I waited on my multiples (bought one for my wife, too) and he was in and out. He winked and nodded as he walked away.

My coffees were finally ready and went to pay… and the gentleman had paid for me.

I looked over as he walked off and hopped in a school bus across the parking lot. He was the driver. Waited until I could make eye contact with him and ensure he saw my thankful wave. He waved back with a smile.

Taking that positivity, I continue with errands. Next stop, dropping off a trailer full of waste at the dump.

At the landfill, the guy guiding me in reverse to unload the trailer thanked me for backing up. 🤷‍♂️

And when I was done unloading the trailer, another guy told me to have a good day.

But both of those guys said their comments with sincerity. Not the monotone, robotic voice we’re all used to in “customer service.”

Hopped out and told the gentleman that someone paid for my extra coffees, so I was passing it on and gave them the coffees.

The smiles on their face were a mile long.

This chain reaction of goodness all started from choosing to wear a “free hugs” shirt today.

Positivity is the ultimate butterfly effect.