The birth of a career

Ever seen a ghost?

Do you remember where your career began?  Your career’s point of singularity?

After a trip taking my wife and kids to the Winchester Mystery House we looked with curiosity at the house with 160 rooms, more than 2,000 doors, and 10,000 windows.  Including stained glass windows created by Tiffany & Co., one of which was made by Charles Lewis Tiffany himself.

Despite all the ghost stories and bizarre features of the house, something else stood out to me. 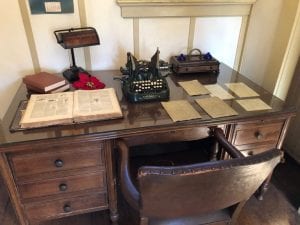 Growing up I didn’t have a computer, so I’d take to the library to type up school projects.  Without a computer at home, I had a great appreciation for using them when the opportunity presented itself.

I realize now that my appreciation for computers began before that, on my grandma’s typewriter.  When I was 11, I spent the summer with my grandma. I’d spend hours typing on her typewriter.  Typing about what? I’m not so sure at this point. I just remember having fun typing day after day.

That summer on a typewriter still stands out as a point of singularity for my love of (pre-era-)computers, which led to:

Which led to establishing SEO National in 2007.  And now I have the pleasure of making a living and providing for my family by working with some of the biggest and best companies across the world.

Thanks for that summer, grandma.