Stop Caring What Others Think

Stop caring what other people think. No, really. Stop.

Half the people are not on your level and don’t even get what you’re doing anyway. And the other half admire that you’re doing WTF you want. Add it together and that’s 100% approval to be happy.

Alright. Here me out with an example. So simple, but so powerful.  Here is a pic of my kids (and super hot wife) exiting a plane on their scooter luggage; my oldest on his skateboard. 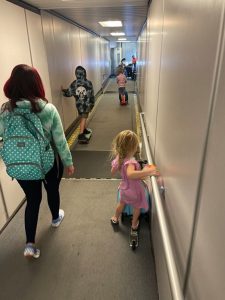 *Gasp* Skating through the airport. Guess what? NO ONE CARES!

In fact, quite the opposite. The flight attendant told my oldest how smart he was for using his luggage bag to pivot and steer his skateboard, and that she thought it was such an amazing idea she was going to tell her grandson.

And that’s just the tip of the iceberg.

As my two younger kids whizzed through the airport with their scooters, they had endless “how cool” compliments and countless whispers of radness as we passed.

If I had to guess, at least 20 positive comments from ONE plane ride.  How many negative? Big. Fat. Zero.

Can’t tell you how many times my four year old daughter giggled with pride as she whispered to me,

“Dad, I heard someone say my unicorn scooter was cool.”

It was not only fun and freeing for my kids to scooter around, but they were emboldened with compliments. All from doing what they wanted, which is often considered the opposite of what is accepted.

Eliminate drama from your life, at all costs.  Friends, family, doesn’t matter. Don’t let other people’s problems become yours.

Demand better in your life. You probably don’t have a lack of happiness problem. You have a lack of self-expression and an abundance of other people’s negativity surrounding you.