History is the ultimate reminder to be grateful.

The pic was posted 12 years ago (2009), but the actual pic was taken in 2006 when the exotic car road rally Gumball 3000 came to the US for the first time ever at the Utah Motorsports Campus.

I’m on the right. My friend Jon Harrington is on the left. Celebrity Travis Barker between us. 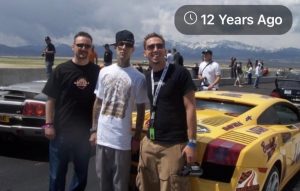 The yellow Lamborghini behind me was my old boss. Both me and Jon’s boss.

I learned all the things NOT to do in business from him. From the lack of respect to employees, no respect for personal time after work hours and weekends, not honoring bonuses.

I’ll never forget when the rest of the team was frustrated he didn’t pay the agreed Christmas bonus. A day or two later after one of them complained, he walked into my office and threw about $400 on my desk, turned his back and walked off.

Back then it sucked… but now it’s amazing because I learned to respect my team. I don’t bug them after hours. I not only pay bonuses, but I’m proactive about incentivizing them. I even show appreciation with incentives without asking.

In this pic I was four months away from marrying my wife, was making crap pay, and had a 60-90 minute daily commute one way. During winter it was 2-3 hours if it snowed.

As Jon said in a call today when he text me this reminder. “We’ve been through more in 12 years than others do in 12 lifetimes.”

Fast forward 15 years and I’m still married to my hot ass wife, my company celebrated its best month ever, I now make more in a day than I used to in a month, and am window shopping Lamborghinis myself.

If that comes across as a brag, check the mirror. If/Until I buy, all my cars are 20 years old. I don’t rock a Rolex. I buy clothes at thrift stores. I don’t care. At this point, I earned it and you should celebrate your wins.

And Jon just celebrated his best month ever, too, after a few years into owning Torch Cigar Bar, THE cigar bar to socialize in the upscale Scottsdale area. Last time I went there, chilled for two hours with a to-be-unnamed Dream Team NBA hall-of-famer.

Know why the life turnaround? Because we move. We’re always moving.

If I told most people “bust ass for 10 years for a better life,” would they? Probably not. Because everyone worries about dumb little details.

As if better has a breaking point. What’s the break even point of better? WHO CARES? It’s better.

It does NOT have to be about fancy houses and cars. The more I accomplish, the less I want. Okay, I did say I’m window shopping Lamborghinis, but after 15 years I’ve earned the right to treat myself.

Bust ass for 10 years so you can provide comfortably for your family, have stable income, enjoy good company and friendships, travel, and just be free from stress and drama.

Being cheap is expensive.