15 years ago I started what would later grow into a 30+ team. In the last year we’ve gone from about 14 team members to 20. Then 20 to 30 in the last month. And I’ve added two more team members this week. And they all work remote. Always have.

I give you that background because, until March 7, 2020, I had never met a single member of my remote team. That week I met six of them, and the company get together was cut short because that’s when the world fell apart and was consumed by a virus. To this day, I’ve still met only six of the 30+ in person. In that year since we’ve continued to grow, both in numbers but more importantly strength.

I send small thanks and tokens of recognition and appreciation for every team member’s birthday and work anniversary. Today was one of those work anniversaries.

You know you’ve built something special when you send a team member a “thank you” and they reply back with an ever greater thank you. 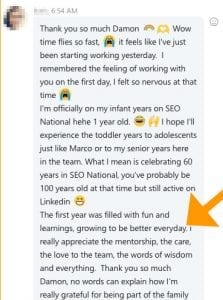