I had a email from an lead asking for a proposal. I had to tell them no.

I wrote them back saying I wouldn’t provide a quote at this time, but would have a call with them to explain why, and give them ammunition to continue shopping SEO around.

The problem was they were asking for outdated SEO tactics to be included. I knew it would get them nowhere fast, and relationships and reputation matter more to me than money.

Here is part of my exact reply.

Even if we don’t engage in SEO, I’m happy to just give you ammunition as you shop around.

Then, depending on how that conversation goes, I can give you a formal proposal.

On the call I didn’t pitch SEO National’s services once. Instead, I gave them the ammunition that I promised to help them make educated decisions as they explore SEO possibilities, including shopping quotes from other SEO companies.

They even asked if I can guarantee results. I told them no. But I could tell them to optimistically expect positive results based on my track record. And I gave clear case studies and data to back up what I was saying.

I gave them the reassurance they were after with the “guarantee” question, but I did it honestly and morally.

Not even 12 hours later, at 6:55 am the next day, they asked for a formal proposal. Not only that, they addressed very specific things they picked up as I was helping them on yesterday’s call, which helps me better help them. 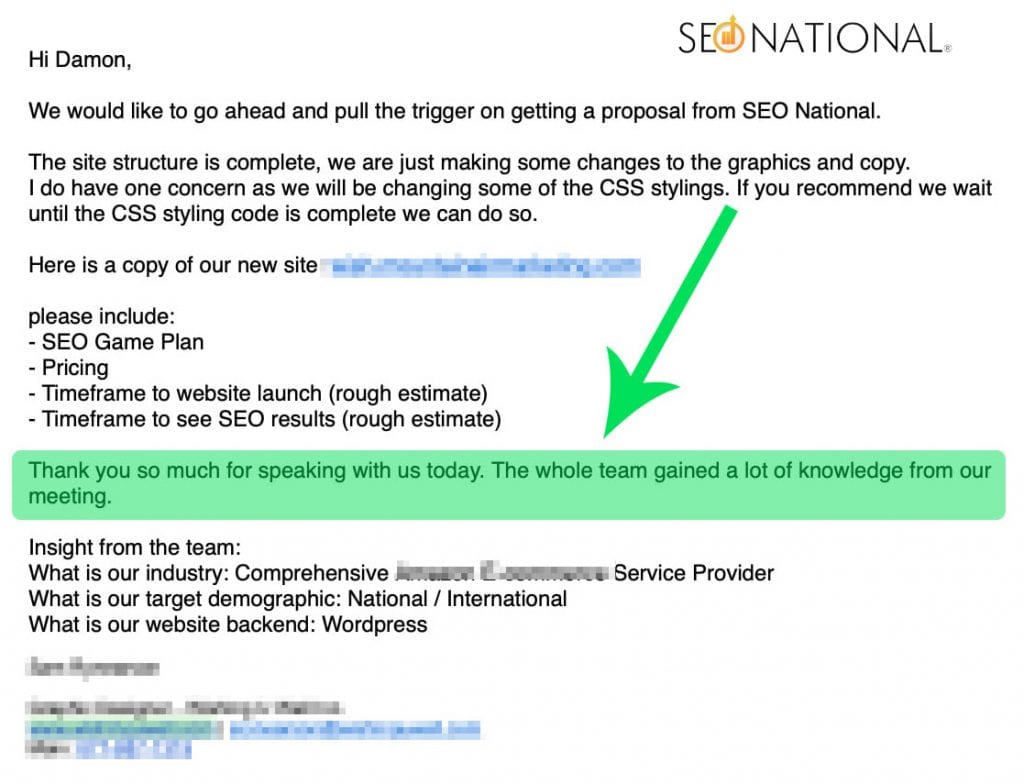 SEO and internet marketing in general is full of excessive promises, big sales pitches, and constant under-delivery. Don’t fall for that, and don’t be that.

Trust your gut, and if you’re on the other side of the negotiations, be the person you’d want to do business with.