Just learned to have scored an eight-page feature in a new #1 best seller by a USA Today & Wall Street Journal best-selling author.

Book is called, “7-Figure Minds; How to Grow and Lead a 7-Figure Business.” 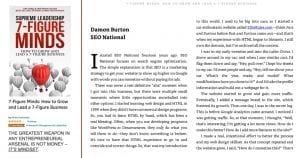 Beyond the obvious gratitude of being featured, it’s cool to see Elite Rides in the story.

If you’re not familiar with my journey in internet marketing, it all started with launching a car enthusiast website called “Elite Rides.” While I still own the domain, I’ve archived the content, only to be opened up every few years for nostalgia.

Elite Rides was an online community of aftermarket car enthusiasts.

I registered it in July 2001. Little did I know that a new movie called “Fast and Furious” would be released six months later, supporting the website’s rapid growth.

As the site grew I bettered my design skills, eventually becoming curious how to monetize it. Enter SEO.

Twenty years after launching Elite Rides and 14 years after founding SEO National, it’s with humbling gratitude to now have a team of three dozen, write for Forbes, and be featured in other entrepreneur’s books like this.

Here’s your approval from a random internet stranger. Do you thing and everyone else can either support you on your journey, or they’re not meant to be with you at the finish line.