Why Not Reach Out to Big People?

Why not tell others (famous, family, friend, or stranger) that you appreciate them?

In 1999, I met Ice-T. Today, I sent him a copy the signed photo from that event, my SEO book, and wrote him this letter. 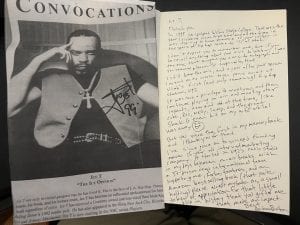 In 1999 you spoke at Weber State College. It was inspiring to have someone of your caliber in the space of hip-hop come to Utah.

I don’t expect you to remember me, but if you do recall anything about your visit, I was the one that brought a mic for you to autograph and you seemed pleasantly surprised by that.

I still have the mic, and a year after your speech I went on to work seven years on-air at Utah’s first (and only remaining) hip-hop station, U92.

It was a privilege to meet you, and then to continue playing on-air and meeting other legends, new and old at the time, like Cube, Nelly, Snoop, and the great Shock G even hit on my wife back stage while I was away. 😆

But you were the first in my memory bank, and I thank you for that.

I’ve since gone on to succeed founding a now-14-year old internet marketing company, some of which was born in U92’s radio studio between on-air breaks.

With an 33-person deep international team supporting me, Forbes features, and an Amazon best-selling book (that you’re holding), please accept my book as a small token of appreciation for that little blip in history that you gifted me that made an impact.