Told My Son “No,” He Can’t Do a Youtube Video With His Friends

My oldest son, 10, just Facetimed to ask if he could do a Youtube video with his friends. I said no.

He knows I prefer he not do anything identifiable online is why he asked. The no was hard. He legit was about to cry.

A few minutes later he text me what’s in this screenshot. 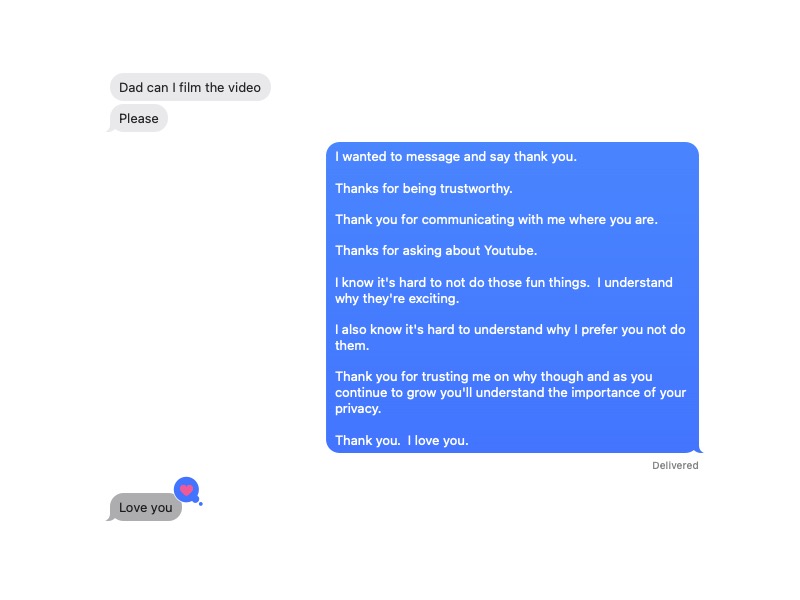 Tough conversation to have, because I see the excitement in doing them as a kid. I would want to do them too.
Equally hard when he sees me online all the time in webinars, podcasts, and interviews.

Nothing wrong with other parents being okay with it. Not saying one is right or wrong. Just the preference my wife and I have chosen… because the internet is forever.

I don’t worry so much about him, though the opportunity as a kid to do something dumb that will live online as a meme for eternity is a real possibility. I am more interested in protecting privacy that can easily evade one small video at a time. Or for him in a video to be taken out of context, or repurposed by a creep-o into something it shouldn’t be.

So I replied to his text with a “no,” again. Sharing my message in case it helps other parents find a way to positively engage the topic without being a meanie-face.

And as I typed this, he just replied with “Love you.” ❤️ Win/Win