There’s no place for excuses

You can either make excuses or you can make success happen.

Instead, own the circumstances and charge ahead.  Make. It. Happen.

I could call my wife, but I didn’t want to overwhelm her with getting three kids ready on short notice and have her take on any anxiety because of my time crunch.  So I called an Uber.

I looked up and saw his Toyota Corolla. But it didn’t stop.  I looked on the app. Now a 5 minute ETA, again? He was still driving… in the wrong direction. I messaged him what shop I was in front of.  He replied. In a way, I think? By canceling the ride.

Great. Now it’s 8:15, my meeting time, and I still don’t have a ride.  I called the office where I was heading to let them know I’d be late. No answer. Their lines didn’t open up until 8:30.  I had a pre-business hours appointment.

In times like this I don’t get frustrated. What good would it do?  The only reasonable option is to find a solution.  Literally, what benefit is there to any other option other than finding a solution?

Grabbed the next Uber, got there just 10 minutes late.  Knocked out a few quick tasks while I didn’t have to be the driver. Bonus.

They were late, too, and didn’t even notice.  Started “right on time,” calm and collected, because I didn’t get stressed. Killed it.

No one but you cares what your excuses are.  So don’t make them and instead make success happen. 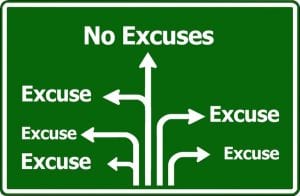