The downfall of Google?

If there were ever a point in Google’s history that we look back at and ask where their downfall began, this picture representing more than 50% of searchers NOT clicking on a result because Google stole/whored/bypassed the info from the original contributor may be it. 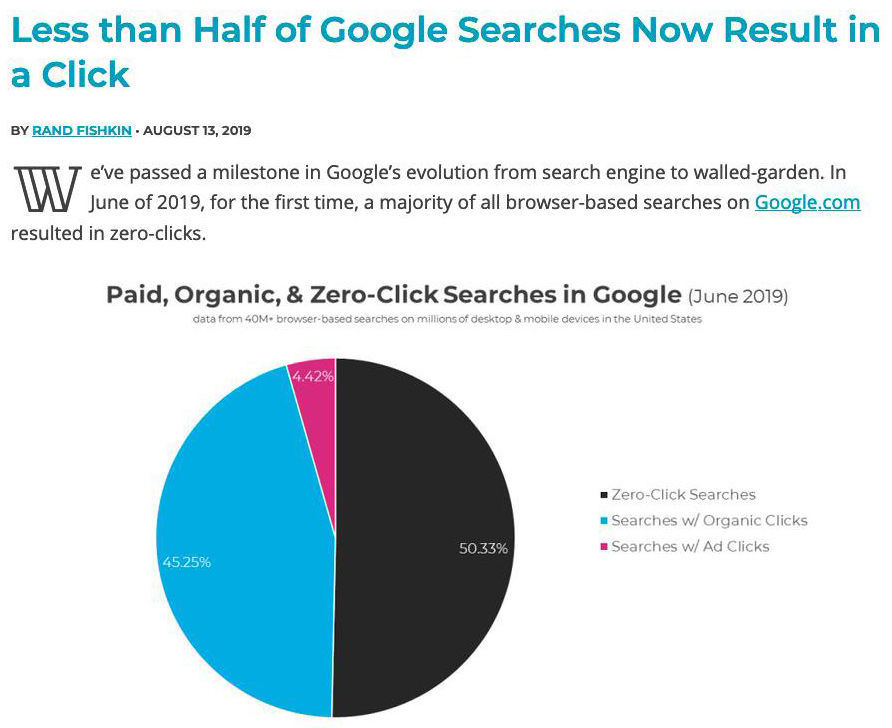 Even Seth Godin chimed in on this groundbreaking data revelation from Rand Fishkin two weeks ago.

Rand Fishkin shares a thoughtful analysis about a trend that now affects just about everyone: Google is hoarding more and more traffic.

When I worked at Yahoo, there were 183 links on our home page. The stated strategy of the company was to build more and more internal content and services (Yahoo mail, Yahooligans, Yahoo Finance) to keep as many surfers on their site for as long as they could.

Google blew this status quo wide open. There were only two links on their home page, because the only place they wanted to encourage you to go was wherever a good search led you.

Year after year, driven by the short-term (shortsighted) demands of the public markets, Google has been losing its way on this effective (and community-based) strategy. In the most recent data Rand quoted, we see that more than half the time, a search on Google leads to someone either clicking on nothing (because they found what they needed without leaving the search results) or visiting a property Google already owns.

If you’re a fan of the open web, this is bad news.

If you’re an individual or business that’s hoping to be ‘found’ via a search, this is bad news.

And if you’re a Google employee or shareholder this is bad news as well, because monopoly is a tempting place to extract cash and drive the stock up, but it’s not stable.

Every monopoly seems like it’s going to last forever, until it doesn’t.

Nice to see someone not directly in SEO like Seth that has a mass audience spreading the truth about this situation.