I have 20 employees. Work will billion dollar brands. Met 0 of my team in person.  Well, until earlier this year, but that was cut short in March as the world melted.

Half of my team is in the US, scattered across various states. The other half is in the Philippines, and I finally made the trip to visit them.  Kind of ironic to have first met the half of the team that’s on the other side of the world, right?

I left March 7th and flew to Washington. From Washington over Alaska, into Japan. Then Japan to Manila. I stayed one night by myself, got a few hours of sleep, and woke up early (as my body thought it was bed time) and went back to the Manila airport to fly to Palawan Island. I met three of my team members for the first time; Kevin, Marco, and James.

We talk daily on Skype so it was like we knew each other right away, because we did. It was super interesting seeing who was as you would expect, and who was dramatically different. Kevin surprised me the most out of that initial crew, as he was the most conversational.

Then the four of us flew to Palawan and met the more of the crew; Shiela, Allyn, Jade, Orlan.

Over the next few days we island hopped, snorkeled, and explored river systems that ran through caves. Exiting the cave I had a bunch of missed calls. Family calling about international destinations closing their borders. I told the team I had probably go, as it seems this may be the writing on the wall.

We finished lunch, and within two hours of exiting the cave I was back at the hotel with a new flight back to Manila. As I landed, I changed my flight home from the next week to the next day. Shortly after, the Philippines president said borders would be closed in 48 hours.

I gave my team the choice to stay or fly back home as well. They all livd in the Philippines, but none on the island they were on. They would all have to fly, too.

When I went from Palawan to Manila, there were maybe five people in the whole airport. When my team left 8-10 hours after me, they had a 2-3 hour wait. The weight of the world had folded, and everyone was rushing.

My flight back to Japan and home was half empty. A week earlier it was over-packed.

My week and a half trip was cut short to about four days. But it was the best four days ever.

The team grew closer, and we experienced memories that will last all of our lifetimes.

Looking back, we totally made the right decision to head home early. Was unfortunate to cut such a momentous occasion short, but the months that followed the world changing has only grown the team stronger.

I’ve taken it as an opportunity to ensure their jobs are secure, and I’ve invested in their well-being at any chance I can just by asking. Asking how I can support their mental health or comfort.

For some we bought new air conditioners (it’s hot for them there this time of year). Others could use new ergonomical chairs. I offered to buy musical instruments, gaming subscriptions, whatever would help with moral.

Then I get messages like this, “Our company trip was amazing even though it was cut short because covid sucks. Thank you for being a great mentor to us.” 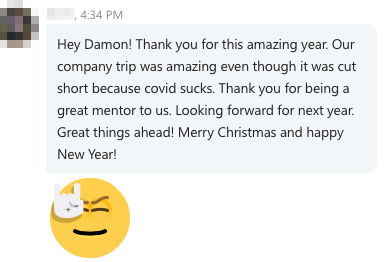 I’d put my team’s loyalty up against anyone’s, despite having barely even met them.