Why small businesses should care about Net Neutrality’s repeal

When people go online, they intend to connect to any website they want. They expect that their Internet provider, whether cable or phone company, will not throttle their data or connect them to websites, applications, and content that they did not consciously choose. In other words, people expect to be in full control of their Internet experience.

Net neutrality is the principle that disallows Internet service providers from slowing down, redirecting or blocking any content, application, or website that people want to use. Net neutrality is the guiding principle of the Internet where ISPs should provide users with open networks. The conventional wisdom has been that ISPs are not supposed to block or discriminate against any content or application that rides over the networks nor interfere with content that people view or post online.

In 2015, the Federal Communications Commission adopted historic net neutrality rules to keep the Internet open and free, allowing users to access and share information without interference. However, on December 14, 2017, the FCC approved a plan to gut net neutrality protections. The repeal of net neutrality rules was meant to deregulate the industry. However, with the repeal, it opens up the possibility for ISPs to block, censor, and throttle the Internet at their judgment and may even slap higher fees on consumers and content providers. The repeal of net neutrality gives far greater control to ISPs and the government, making the net less powerful in the hands of users. 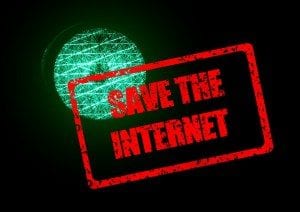 There are, of course, two sides to net neutrality, with strident arguments on both sides.

The following are the potential benefits of the repeal of net neutrality:

Possible disadvantages of the repeal of net neutrality:

What many people don’t realize is that many cloud-based apps rely on the same network used by services like Pandora and Netflix. Any price increase or throttling to bog down a shared Tier 1 network could slow down untold numbers of sites and software, which will hobble business in general.

A perfect example is when a single teenager took down many services for Amazon, Virgin Media, BBC, Vodafone and more. Or when Spotify, Reddit, and the New York Times were hard to access. If a targeted attack from a teenager can take down so many services, imagine what an intentional throttle from an ISP could do.

Who knows. The big fears that accompanied the repeal may not be realized. ISPs may have their way, for now, but the market may dictate a big enough pullback to keep things in check. The repeal of net neutrality may spur municipalities all over the country to come up with local plans to counter the wide-reaching influences of major ISPs. Cities will invest in the Internet, providing new possibilities. For example, the cities in my hometown of the greater Salt Lake City, Utah area are joining Utopia, a group effort of municipalities to offer their own fiber optics service. Fort Collins, Colorado just voted to move ahead with a municipal fiber broadband network, too.

It has only been weeks since the net neutrality repeal. Only time will tell how it will affect website owners and e-commerce retailers. One thing is for sure, good or bad; the impact of the repeal will go beyond the U.S. shores. It has the potential to become a global issue because many businesses around the world piggyback on U.S. commerce.