My phone rang this morning.  Who it was isn’t important, but it did get me thinking about what was.

When I was 12, three of us were at another friend’s house. We were in his living room waiting for the phone to ring. Just staring at it. Because his parents just bought Caller ID on their home phone. 🤯

Caller ID had just come out and my friend John had some of the cool parents that paid $2.99 a month for it, or however much it was.

We all got excited and jumped to our feet. Of course I did the reasonable thing and immediately answered his phone, “hello?!”

I just ruined it all.

Because back then you had to wait two rings for the Caller ID to kick in and show you who was calling.

And that’s when I started thinking this morning about what’s important in life. 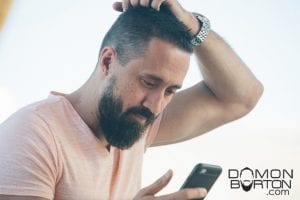 As a kid, I was sometimes jealous of families that had cool stuff like Caller ID. But no one really cares about it now and it’s taken for granted. I bet some friends reading this now didn’t even know that you used to have to pay for it.

That’s when it clicked that the things you used to want that you eventually got the easy way, like Caller ID, you ultimately take for granted. You get comfortable and don’t value it like the other things that you had to fight for.

How many times have you given up long-term goals and happiness because the comfortable way was easier?