Met a friend for the first time, 13 years later

I don’t know how he found me, but he was the first customer that ever called me that wasn’t referred by another existing client.  He was one of the people who trusted me when I first started SEO National a few months earlier, that same year.

But earning this new friend went beyond business. I helped him learn about websites and internet marketing. He was also an aspiring entrepreneur and I’m always rooting for those that put in the work. In return, he was kind enough to refer a few of his business contacts as new clients in my company’s early years.

This new friend’s career has evolved beyond websites over the years and I haven’t done business with him since 2016, but we’ve stayed in touch.  And recently, I was taking my wife and kids on a trip to Florida and I remembered that’s where he lived. I didn’t know where in Florida, but it was worth asking if we could meet up.

He ended up being three hours away from where we would be staying. However, I offered to meet in the middle if he was up for it. A two hour drive for him and a one hour drive for me and we made it happen.

I finally met KC. Over our 13 year friendship, we both married and had kids, so we got to meet each other’s whole crew.  First, a trampoline park where I was able to show him how not-young I was. 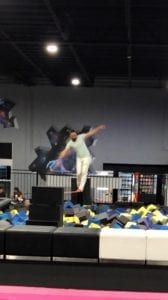 Then, some late night pizza with our families.

It was great seeing him out of the screen and in person, catching up on “old times” that we had connected on digitally.

The thing with good people is consistency. Their goodness will reveal itself in the way they treat you and other people.   For our situation, distance didn’t matter. Good people are good people. They’re the ones you need to associate with to win in life.