How I joined Russell Brunson‘s Inner Circle is a hilarious story of spending $50,000 completely unexpected. Here’s how I’ve made that money back… and then some. 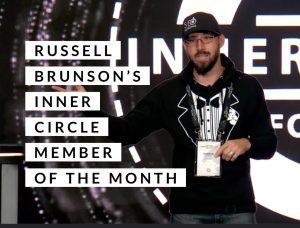 Last September I went to an event called Funnel Hacking Live. Josh Forti was kind enough to let me tag along and network with him.

We went all over the place at the venue, but I couldn’t go past a magical sash. He had “early access,” which was nothing more than an invisible line to access seats sooner.

I didn’t even necessarily want early seat access. I just couldn’t hang out with my friends past this invisible line, and that drove me crazy.

I asked the person at the entry if I could upgrade wristbands. I didn’t expect anything for free. In my mind I was willing to pay upwards of a ridiculous amount of $1000 to just change my wristband from red to blue.

They said “yeah” and to talk to guest services where they were handing out t-shirts.

Early access was only for those that had won an award or were in their coaching program.

I asked what coaching programs they had.

Robbie is the lead sales magician at Click Funnels. The gatekeeper.

Told him what I asked the desk. He confirmed, no-go.

He asked if I needed their coaching programs, of which I wasn’t looking for.

But then he asked, “what about a mastermind?”

“Here’s the deal… we’re re-opening Inner Circle at a luncheon in 90 minutes. You have to do at least a million in revenue, someone has to vouch for you… and it’s $50,000 to buy in.”

Didn’t take me long to consider… and I did it.

Got my vouching, proved revenue, and I bought in.

I had been looking for an opportunity to force myself into the world of lead-gen outside of SEO. That was literally the reason I was at FHL to begin with.

If I had accomplished this much “without doing marketing,” ironically while owning a marketing company, just imagine how much more I could accomplish?

10 months later, Inner Circle member of the month and up half a million from a $50k investment… and I still haven’t even implemented 90% of what I’ve learned. Trying to pace myself so I don’t fix what isn’t broken as I transition agency operations to SEO National’s COO-becoming-CEO… THEN implement everything.

We got such a good thing going there and I want to keep that 100 while I start moving my personal time to where I get the most fulfillment… relationships and helping other entrepreneurs grow.

Got a lot in the works, and no sign of slowing. Inner Circle has been an amazing opportunity to learn and teach at the same time. I appreciate the opportunity to support my incredible entrepreneur friends, and to be recognized in return is amazing.

Thank you for being a part of my journey.