Help Instead of Judging

This is Mike. He’d been looking for a chimney for a local co-op farm.  I know nothing about farming, but he sent me a message. 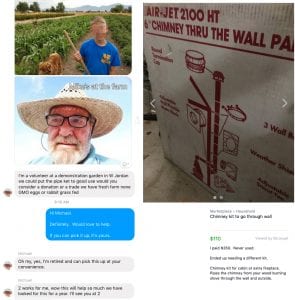 I bought a chimney kit two years ago for a small cabin project. When a professional came to fit the chimney, he said the kit  wasn’t recommended due to more modern solutions.  I paid the professional to do it right and brought the $350 kit home to gather dust.

Fast forward months and I posted it for sale at a bargain $110. That’s when I received a message from Mike.  He’s retired, volunteers at the farm, and believes in helping locals eat healthy and learn agriculture.  He didn’t have money for the chimney but it was exactly what the farm needed. He asked if I would donate it.

Of course it sucked being told that I wasted $350 but, more often than not, my “mistake” later has a purpose arise.  And Mike was this chimney’s purpose.

How many times did you have an opportunity to help? As simple as handing the homeless change? The same coins that you’ll stash in a jar to gather dust.

But let their character be in question for how they spend it, and not yours for passing on the opportunity to help.

Money can be earned again and again. If you use it for something greater than yourself, it’s money well spent.