Proud of these little dudes. Last quarter they were ahead 14 to 10. They lost 14 to 17 in the final minutes.

Slow start at the beginning of the season. They worked so hard and had a good coach pushing them kindly bur firmly. The climbed their way through the ranks and ended up in the finals.

Tonight was a finals round and they won. Then we found out that whomever wins, uh, double header one hour later, same night. They got an hour break and went right back at it. 😳

They led the whole game. WHOLE game, except those last few minutes.

As the other team grabbed their trophies and lined up for a pic, skipping customary “good game” cheers, these guys did their side of the cheer.  I doubt the other team passed on the good sportsmanship intentionally. They were probably just excited, and rightfully so.

But, man, these little guys on our kid’s team, after they did their cheer they freakin’ waited and watched the other team take pictures holding trophies… and waited to tell them good game. 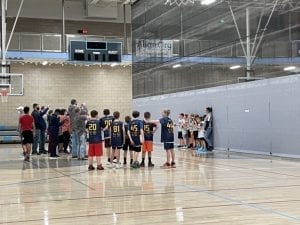 Little punks made me cry. That brought more pride than had they won.