My following of Tyson Fury is new. I didn’t know anything about him until I watched him defeat Deontay Wilder in Feb, 2020.

From what I’ve been told and briefly read, back in 2015 he had it all. But in an interview in 2016 he was candid about drug use and not wanting to be alive, and that “cocaine is a little minor thing compared to not wanting to live anymore.”

He vacated multiple titles in 2016 so he could focus on his mental health.

Fast forward a few years and he’s on top of the world more than ever.

What’s that have to do with sexuality, jealousy, M&M’s and kids? 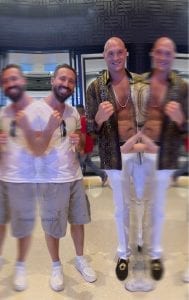 After I met him, he faded into the crowd. Not 20 seconds after he walked away I heard some jealous guy say something about Fury like, “he’s got more hair on his chest than his head.”

What that guy didn’t know, other than a lot, was that just moments before, Fury showed some of the kindest humility to my family.

We had just finished taking our kids a few blocks on the Vegas strip. We had our string of mumbles of people saying “I’d never take my kids to Vegas.” They’re not wrong, but they’re also not right. What they didn’t know was that we were on the strip solely to go to the M&M store.

Sure, along the walk my kids saw sexuality, likely too mature for their age. Wasn’t intentional to expose them to that, but I’m not going to shelter my kids from the reality of the world either.

After our family’s book being judged by its cover, we crossed the road near the M&M store to the other side of the strip, which looked much calmer. Was a good move. There was a lot less people, and with no bars and smaller crowds the inappropriateness nearly vanished.

We took a detour through one of the shopping centers because my kid saw a sign of a shop he wanted to check out. In that shopping center was where we met Fury.

With a small crowd of half a dozen around him, he was patiently taking pictures. Having worked on-air in radio for seven years, I’ve met my share of famous people so I didn’t want to bother him. As he took his last pic and walked away he looked back. With one of my kids on my shoulders, I just smiled and waved as we made eye contact. He must have seen something in that family moment. He dead-stopped, full-body turned and asked, “Do your kids want a picture?”

He waited as I asked my kids, two of them too shy, but my oldest said yes. As much as you knew he was in a hurry, he took all the time that he felt WE needed, not him. And the moment we said thanks, knowing we were content, thought it wasn’t his obligation, he rushed out.

That’s when Mr. Jealous hair guy commented about someone he doesn’t even know, but just impressed me so much.