“Date your job until you find a career worth marrying.”

It’s not a quote I heard anywhere, but rather a mentality that I committed to somewhere along my entrepreneurial journey.

To this day, I still consider how great of a job that was. I think of it weekly as I pull the trash bag out of the kitchen garbage, put a new one in, tie a knot, and poke a hole in the bag to allow air to flow so the bag doesn’t puff up when you drop garbage in it… all learned as a janitor.

My next job was at Michaels Arts & Crafts. I started there as a regular sales associate. It was a new location, so me and dozens of others literally built the store. We installed floor units, shelving, pegs, and eventually stocked shelves.

I worked there for a little over a year before the assistant manager asked if I’d want to be promoted to be a (picture) frame shop manager at a new location they were opening an hour north.

I was 17, a senior in high school, and lived at home… obviously.

But, get this… a few weeks later, my family was moving 40 minutes north, putting me within 20 minutes driving distance to the new Michaels.

I followed up with the manager, and she extended the original offer.

But the woman that promoted me saw my consistency and dedication.

She lived near the first college I went to. I studied psychology and sociology. After about a year, I needed something even bigger, so I switched colleges and moved in with my dad to the major metro.

I didn’t know what I wanted to major in, so, as many people do, I took generals so I could feel out the options as I learned. I was comfortable NOT having a career chosen, because I figured it would be worse to pick a wrong path than to wait to pick the right one.

By then, I had taken a job working at a bank. I never worked in a branch. Instead, it was at their corporate headquarters. I worked in a department called CIF. It stood for Customer Information Files.

When you’d change your address or add or remove someone on your account, updates like that came to me behind the scenes.

In dating the bank job, I learned to appreciate working the afternoon shift to go to college during the day.

One evening, I was working alone and listening to the radio. It was the local hip-hop station, and they were giving away concert tickets to caller #9.

If you don’t know how radio really works, the call was recorded, edited, and played back later. The DJ made fun of how monotone I was. It’s true, though. I actually had gotten in trouble for it at the bank job for being so bland on the phone with bank tellers that would call in with questions.

But before the call was aired, the DJ and I talked offline. I asked how to get a start in radio. I wasn’t asking to be on-air. Just wanted a foot in the door, to be exposed to that world.

And he gave it to me.

Instead of tickets, he said to meet him at the concert an hour or two ahead of time to help hang posters. Suddenly, I was an intern, and that was my first radio “remote” (event).

And within three months, I was on-air. 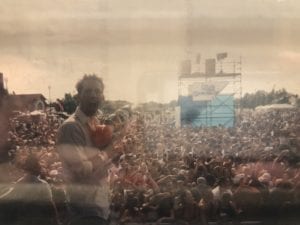 Yes. It was all the cool things that you’d expect.

However, in dating the radio job, I quickly saw that I never wanted it to be a lifelong career. I’d see great people lose their jobs in short periods of time. And it’s not like you can just go to the radio station across the street. At a moment’s notice, you could lose your job, meaning you’d be packing up and heading across the country to find a new position at a new radio station in a new state.

Having moved a lot when I was younger, I wanted roots. And knowing I’d someday have a family of my own, I DEFINITELY wanted stable roots for them.

So I continued to date radio job, knowing it was just a fling. That allowed me to enjoy it. I could embrace the fun stuff, and not sweat the bad since I knew it was temporary.

When working on-air, I’d often be sitting in the studio with just me, music, and the computer. That’s when I started tinkering with web design.

I started my first website as part of a communications class. It was a car enthusiast website called Elite Rides. It went on to gain a following of several thousand members and hundreds of active daily users.

There I was, living the early-20’s dream. By then, I had my own apartment, my 1993 Ford Probe GT was paid for, working in radio, and building my own community of friends through Elite Rides.

Dating the radio job and Elite Rides eventually became an additional love affair. I was able to marry the local car community I had built with the radio station’s annual “Cinco de Mayo Custom Car Show & Concert.” Elite Rides would become the event organizer of that show.

During these years of awesomeness in radio, I would visit my younger siblings at my mom’s an hour north. Through those visits, I met a girl. She was my mom’s neighbor. We had known of each other through her talking with my mom, and me doing the same. But we had never met.

She knew I was into cars and asked my mom if I could sell a spoiler on eBay. Her friend had wrecked her car, so she was selling salvaged parts off it.

I met her, drooled at her hotness behind the scenes, and sold her spoiler. I lost about $80 because I didn’t factor in shipping a huge car spoiler, but I couldn’t let her know that. Had to play it cool.

I invited hottie to the radio car show and concert. That was the first time we had “hung out.” We ended up spending the whole day together, including hanging out at the after-party until 1 am… and she had to work at 4 am! 😳

That was a Sunday. The next day I “visited my mom,” (went to see hottie). Asked her if she’d want to hang out again that Wednesday. We had our first date.

That night was fun. At least I thought. Later, I’d find out that as I was singing “stop, in the name of love… before you break my heart,” that hottie swore to herself that we’d never hang out again after that night.

16 years later, we have three kids and, with one exception of me traveling internationally, we haven’t been apart for more than 24-48 hours.

When she and I started planning our wedding, I asked the radio station if I could take some time off. I never ended up returning.

I also never returned to college. You go to college for opportunity. I saw that I had one right in front of me.

My “side hustle” started to pick up. When I realized Elite Rides had begun to grow, I asked myself, “How can I grow this more?” That’s when I dove deeper into web design.

And as it continued to grow, that’s when I asked, “How can I monetize this growth?” That’s when I dove into internet marketing.

In February 2007, I founded SEO National. And nearly 14 years later, I have a team of 20, work with billion-dollar brands, NBA teams, and Shark Tank-featured businesses, and we’re blessed that my wife stays home with me since she was pregnant with our first kid.

“Being comfortable with the unknown” is one of the single greatest contributions to what I’ve accomplished in life. If there is one thing you take away from reading this, it is that it is OKAY to figure it out as you go. You do NOT need all of the answers, so long as you’re willing to continue seeking them… dating along the way until you find the right solution to marry.