Circumstances are what you make of them

This weekend I had a six hour drive. Four hours later we weren’t even half way, countless wrecks were reported, including 5 cars we saw slid off ourselves.

As the snow storm rolled in heavier, the visibility went from about one mile to 20 feet. I pulled off onto what I knew would be the last exit for 50 miles, which, driving at 10 mph, would have equated to hours.

I checked the weather and it wasn’t going to let up for at least four hours. Afraid of becoming one of those slide off statistics, I packed up the family and went to the first hotel we could find.

The gentleman that checked me in was nice. Yet, for $49 a night I knew what we’d be walking into.

Sink was cracked, tub stop didn’t work (a must for kids tubbies), paint was peeling, but we were safe and warm.

The snow ended up NOT stopping four hours later. According to my middle-of-the-night pee breaks, it was more like eight hours.

Could have been worse though. We could have kept driving. Later, we found out that we missed a tanker rolling over by an hour or two that shut down the freeway for HOURS.

Crazily, the same thing happened on the way back the next day. Fortunately, we missed that one by just 20 minutes.

When we started driving that day, my wife and I joked, “wonder what adventures we’re going to run into this trip?”

Our kids loved our unplanned stop. They met a new friend, the hotel cat that roamed outside. They named him “Hi,” because he’d meow back any time they said “hi kitty.”

I had a snowball fight with my boys. Although, it didn’t last long with how cold it was.

During tubbies, my daughter had fun playing with the towel that I used as a makeshift tub stop.

I moved the nightstand that was between the two beds to the side of the room. That way I could squish the two beds together to make one large one. We made a Burton sandwich. Me and my wife were the bread.

Could have been miserable but, instead, circumstances are what you make of them.

The next morning we rolled out at 5 am to get an early start on the remainder of our several hour drive. There was a beautiful glow of the clear valley trapped below the white blanket of clouds above. 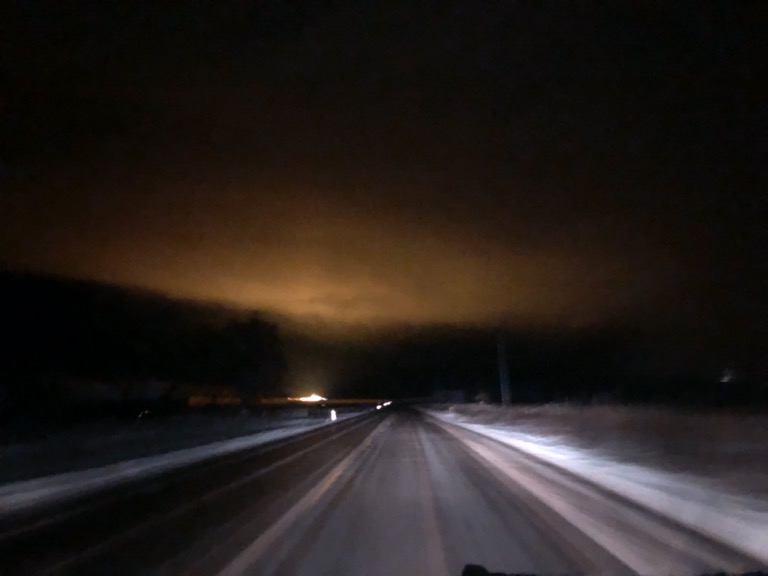