And tough life lessons were learned.

Last weekend my eight year old did awesome at the lake kayaking in front of me on his own. He rocked his mom’s smaller pink kayak. 😆

After looking at last weekend’s pictures it really caught me how proud of him I was. Pictures of him kayaking 10 feet in front of me, braving through the water where he was a little nervous just a few minutes ago.

Later in the day I was sharing with him some of those proud thoughts and I remembered that I had a gift card to Cabelas. I’ve been sitting on that gift card for probably two years because I didn’t want to buy something just to buy something. Here was a great opportunity to put the card to use and get my son his own kayak.

We went to Cabelas last night and they didn’t have any youth kayaks. All they had left were $500 – $1500 adult/fishing kayaks. That’s a big no.

As were were going to bed last night I suggested that my wife could take the kids to Lifetime where these kayaks are made. Their manufacturing facility isn’t too far from our place.

They went there today and the goal was to get kayak A in the picture. $80, cheap, does the job… not pink. 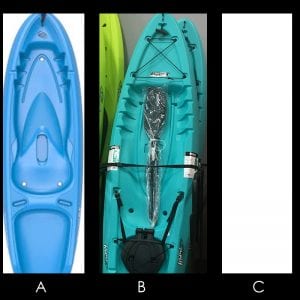 As they’re checking out, my wife sends me a pic that our son wants kayak B. It’s about $160. Double the price, but not a deal-breaker.

I came up with a compromise, because B would grow with him for closer to 4 years instead of 2 years for the other one. I told him if he cleaned the basement and threw away unused toys (not just chucked them into the corner) that he could get kayak B.

“Dad, do I have to clean just my toys or my brother’s, too?”

“Can you send mom a picture of how messy it is so I know?”

– No. It’s messy. You don’t have to do the deal and can just get kayak A. But if you want kayak B, that’s the deal.

I told him, “Listen for a sec. I’m going to tell you something that won’t make you happy. But let me say the whole thing before you get upset. You’re not going to get a kayak today. Maybe we can get a kayak on another day, but I’d like you to come home and think about how you’re acting and if you’re being grateful or not.”

Sometimes it’s not what you give in a lesson to your kids that they learn from. It’s what you don’t give.