How I Outranked a BILLION DOLLAR Media Company… but Don’t Laugh.

In 2007, I outranked a BILLION DOLLAR media company on Google.  I’ll tell you which one, but only if you don’t laugh.

“What’s so funny about that, Damon?”

Because I outranked them for their #1 show, The Bachelor. 😆

But to know how it happened, we have to go back a few months before that, in fall of 2006.  My wife was watching The Bachelor. “Babe, come watch.”

Kind of like how I don’t watch sports, but I’ll watch championship games, I came in and watched the season finale with my wife. Something was different about the end of this season though. At the end of the finale… they announced who the next Bachelor was going to be. From what I remembered in watching The Bachelor “Championships” before, they made you wait to know who the next guy was. Guess they wanted to build suspense this year.

So I went in the other room to look up who the guy was on my computer. Surprisingly, little info. He had a site, but it was slim on pics and content. I started thinking, “If I’m looking this guy up already and can’t find much, imagine how disappointed the die-hard fans are going to be when they look?”

Then I thought… “Why don’t I build the site they’re looking for?” 🤔 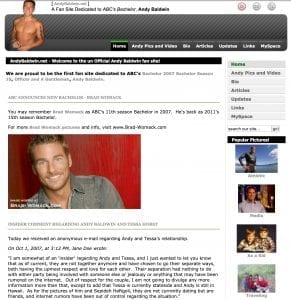 That night I spent about 90 minutes building a site that cataloged what little info I could from dozens of small sites to build one big site. I optimized it as best you could for 2006 days and… guess who was #1 on Google in just days?

Slapped ads on the website and cha-ching! A cash cow born in 90 minutes that paid thousands of dollars over the next few months, while I did little-to-nothing after that first night.

I went on to repeat the same success on the next season of The Bachelor.  That’s when I knew I was onto something.  Then I repeated this same concept of building top ranking websites for industries like:

Guess why my SEO strategies work so well? Because I SOLVE CUSTOMER PROBLEMS.  The Bachelor site satisfied a need. There was an audience with a problem, and I created the solution.

SEO is not a guessing game. It is a science.

Search engines are an algorithm. A machine. This means that once you know how their algorithms work, you can get them to work in your favor.